A new excerpt from Assassin’s Blade …

Fia, an enterprising young dragonrider, sees her father kidnapped before her eyes — an act of war, for he is one of the leaders of the Italian city-state Fiorenza. As the land plunges toward war, she engages her grandmother, a retired assassin, to help her kill the kidnappers and rescue her father.

This excerpt takes place shortly after her father is kidnapped, and Fia’s whole world goes on tilt. When she gets back home, she finds a messenger is waiting for her family with an unusual ransom demand. 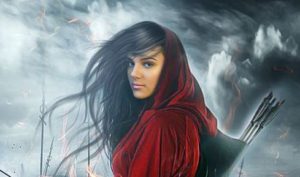 Mama sat in her favorite chair, crumpled over in wails. The servants clustered close as if to protect her. Mama’s maidservant softly brushed back her hair, speaking soothing words as best she could through her tears.

At the hearth stood a greasy-haired man that Fia had never seen before.

“Who are you?” Fia demanded. “Are you the cause of my mother’s tears?”

The greasy-haired man pulled himself upright next to the hearth. “I am a messenger, sent by those who hold Folco Portinari captive.”

“Don’t you see what misery you’re causing my mother? My family? You should be ashamed,” Fia said.

“I am not the one who holds your loved one captive,” said the greasy-haired messenger, leaning on the doorframe. “I am merely an agent, acting through a middleman, so I have no knowledge of who sent me. I only tell you what I was told to say. And….” He pulled something out of his pocket and held it up.

Fia squinted at it. It was a small figure of a person made of clay with a smiling face. It looked like something a child would make.

Teita Anna took one look and bristled. “Take that evil thing out of the house at once.”

But instead of speaking, the messenger and flung the clay figure into the embers in the fireplace.

Fia took a step forward as the man folded his arms. “What are you doing? You can’t throw your trash into our hearth.”

He held out a hand to stop her. “Wait,” he said smugly.

In the fireplace, a fire was always burning, or embers lay waiting for wood. A small spit of fire blazed up from the embers from where he’d thrown the small figure. Among the ashes, something stirred.

Fia turned and stared, unable to believe her eyes.

Chunks of embers arranged themselves into a vaguely human shape: a larger piece of ember for the head, two embers for the body, stacked atop each other, and then the limbs strung together with the ashes and bits of cinders.

With a soft grating noise, like a log sliding over and breaking burned wood, the small human-shaped group of embers rose to its feet among the heat and ashes.

Little Isa screamed, just about beside herself. “Kill it, kill it,” she cried as she fled to hide behind Fia.

“What is it, what is it?” her mama cried, crossing herself.

The creature limped across the floor, burning embers glowing red as the air moved across it, leaving a trail of burning and ash across the wooden floor.

Fia recoiled. She could feel the heat coming off that … thing. It had ears like a cat, like a tiny devil.

She grabbed a pitcher of water to pitch over that thing, but Bice caught her arm. “Not regular water! We need holy water against a devil!”

Two eyes opened wide in the creature, then narrowed, filled with orange fire. A mouth opened, a small gap in the black ember full of fire.

“Pour the water on it,” Mama urged, tears still leaking from her eyes.

Fia stepped forward with the pitcher, except just then, the creature spoke like the hissing of wood in the fire, and flames winked inside its mouth. “I am a messenger, sent to tell you that Folco Portinari was kidnapped.”

Fia shot an astonished look at the greasy-haired messenger. “The thing speaks.”

Greasy Hair chuckled. “Yeah. It does. It’s just a bit of magic from the kidnappers. I’d listen to it if I were you.”

The ember being rotated its head so its orange flame-eyes looked at Fia. “If you want to see your father again, you must pay us 10,000 gold florins.”

Fia turned to the creature. “You are insane. Nobody in Fiorenza has that kind of money. Not even the banks have that much money.”

“How do you know that?” the imp hissed.

Fia had been a girl, and he’d laughed when she’d imagined the mountains of gold that lay in the banks. “That’s not how it works, raspberry girl,” Papa laughed.

Fia shook herself back into the present before her grief could return. “Do you work for the devil, or for the son of God?” she demanded.

“I work for those who send me.” The imp reached out a chunky arm toward Fia’s ankle, setting her legging on fire. Her sisters screamed as Fia jerked back in pain, but working with dragons had made her quick to react to fire. She splashed some of the water in the pitcher on her leg and quenched the flames.

“Watch what you’re doing,” she snapped at the imp, shoving the water pitcher at it. “One more move like that and I’ll douse you. I don’t care who sent you.”

Assassin’s Blade goes live on May 7!