"See if you can pick her out."

In 1864, after a vicious battle in Allatoona, Georgia, Major William Ludlow was walking to the field hospital with one of the surgeons. To William's amazement, the surgeon said that one of the wounded soldiers was a woman. “See if you can pick her out.” As they walked through the ranks of wounded soldiers lying in their hospital beds, William searched their faces, but with no luck.

On their way back, they stopped at a bed where a tanned and freckled young rebel, hands and face grimy with dirt and powder, lay resting on an elbow, smoking a corn-cob pipe. The doctor said, "How do you feel?" and the answer was, "Pretty well, but my leg hurts like the devil." As they turned, the doctor said, "That is the woman." She belonged to the Missouri Brigade and had followed her husband and two brothers into one of the regiments. When they were all killed, she had no home, nowhere else to go – the army was the only safe place for her. So she picked up a musket and served in the ranks.

During the Civil War, many women entered into the war effort. A few actually served as soldiers, while others served as nurses, spies, and vivanderes (field medics and battlefield helpers). Courageous Women of the Civil War: Soldiers, Spies, Medics, and More looks at 16 brave women served the causes they believed in.

At the outbreak of the Civil War, nearly everybody was caught up in patriotic fervor—men and women, Union and Confederate. Many women supported soldiers through knitting and sewing needed items, growing food, making bandages, gathering medical supplies, and more. But others wished they could be closer to the fight. These women defied society’s expectations and bravely chose to take on more dangerous, unconventional roles. Courageous Women of the Civil War reveals the exploits of 16 of these remarkable women who served as medics, spies, battlefield helpers, and even soldiers on the front lines. 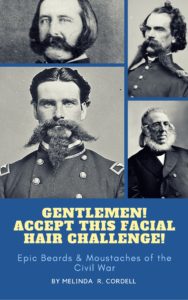 When I was writing my first book, Courageous Women of the Civil War: Soldiers, Spies, Medics, and More, I was digging into online photographic archives to find suitable pictures of the women I was writing about. In the course of my research, I came across some of the most interesting facial hair I've ever seen.

Now, I've never been a huge fan of beards. But, these pictures! And those beards! I started posting old pics of magnificent Civil War facial hair on Facebook, saying "GENTLEMEN. ACCEPT THIS FACIAL HAIR CHALLENGE" and everybody would come over to check out the cool beard. And that's how this book came to be. I found interesting stories about most of the gentlemen in here, and shared them here as well. 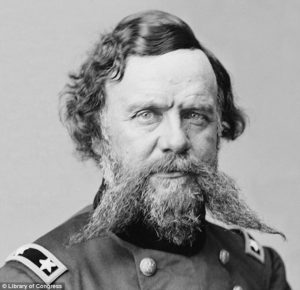