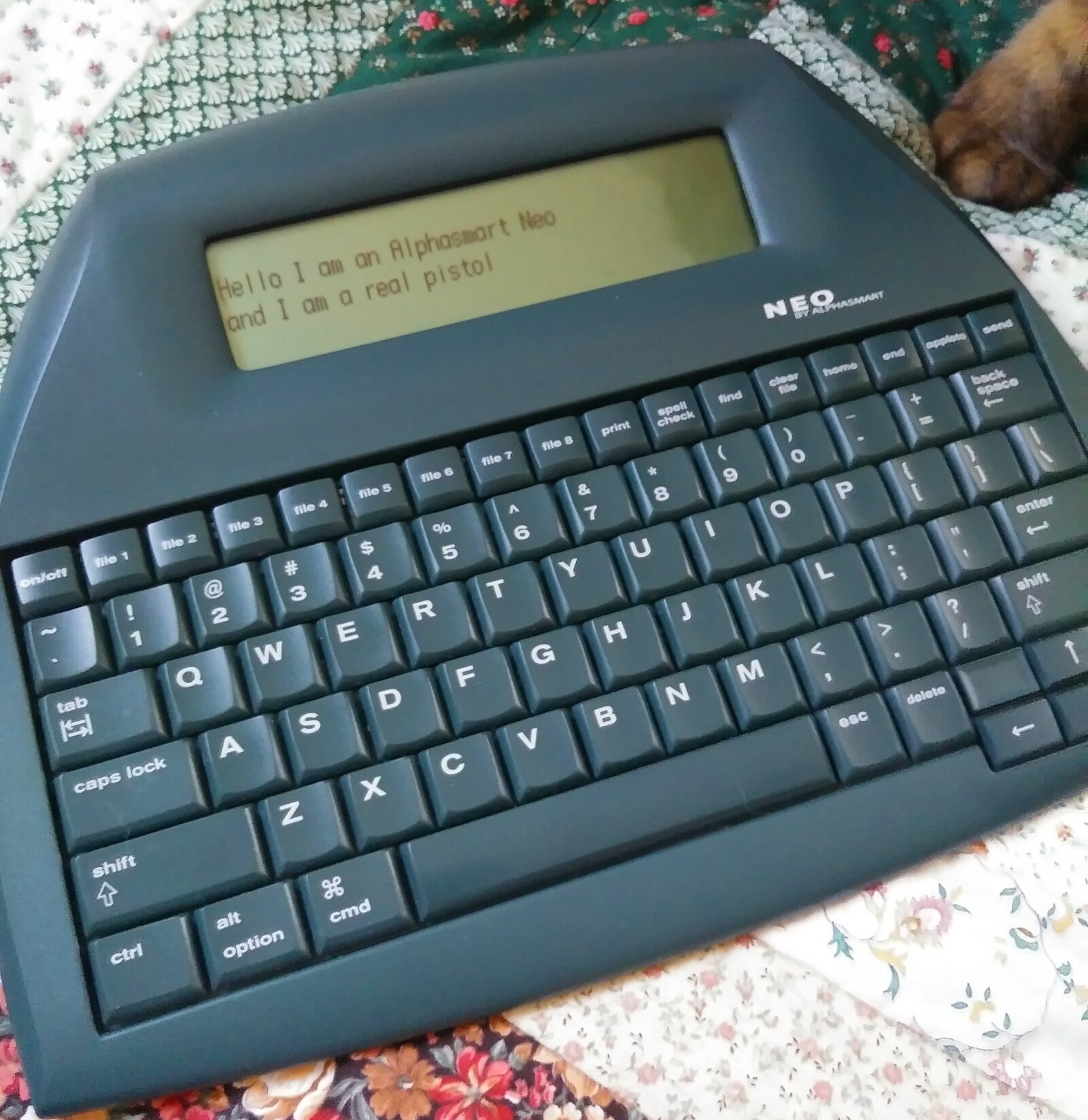 I have an Alphasmart Neo and it is the best writing implement known to man. Fight me.

It’s four thirty in the morning, and I am writing this in the dark with my Alphasmart Neo on my lap and I’m busily typing away on this with my eyes shut. I can also feel my fingers make some spelling errors as I type, but I don’t worry about that as my eyes are closed and I can fix those later when I upload this document.

It’s just pure writing, me with my eyes shut talking on a keyboard, translating the words in my brain straight into type. And writers always talk about how the best time to write is when you’re in that liminal state between waking or sleeping — my Alphasmart Neo gives me that time in spades.

I found out about this handy little device a couple of years ago. I was trying to find a little laptop that was more portable than my Gateway laptop, which dates from about 2007. I totally killed the internet on that thing so I could actually write, so that’s a big reason that the little machine has been able to endure so long. But I wanted a computer I could carry with me wherever I went.

And then I read some articles about the Alphasmart keyboards. They were built for schoolkids to use, so they are very durable. You can sit on them or drop kick them and you can still write on them just fine. However, I have had no luck with water on this keyboard. (On the other hand, I spilled milk on my old Gateway laptop. I cleaned it up the best I could. For a little while, it screamed every time I turned it on, but it stopped doing that after a day or two, and now it works just fine.)

Alphasmarts are not being manufactured any more, but there are still a ton of them out in the world from schools that no longer use them. I buy all my Alphasmarts on Ebay and they usually show up with a couple of assignments still on the machine.

An Alphasmart Neo runs on three AA batteries. This unit uses very little power, so the three AA batteries can last a long time. What’s more, I use rechargable batteries, and keep three of them charged and ready to go when these three go kaput. I’m not sure when the last time was that I changed out these batteries. It has been some time ago — I can’t even remember. It’s at half charge right now. Even if the batteries conk out, the machine still stores your words.

The Alphasmart saves automatically, so even if you accidentally turn it off, all your stuff’s still there. The screen is tiny with only a few lines of text on it, so it’s tough to edit on this machine – but I never hardly ever do. You could write up to eight hundred pages of text on an Alphasmart if you wanted to — 100 pages per document — but generally I just upload the text to my computer about every other day because otherwise I forget what I’ve written.

How do you upload the words from the Alphasmart to a computer? Well, I open up a word doc on my laptop computer and put the cursor where I want the text to start (if I’m adding this to a document in progress, which is usually the case). I plug a printer cable into the Alphasmart and connect it to my laptop. Then I hit “Send” on the Alphasmart, and the text starts rolling out onto the Word doc as if it’s being swiftly typed by a friendly ghost.

Now with the Alphasmart, my writing routine often includes waking up in the middle of the night and writing stuff in the dark, as I am now. I’ll put this under the covers on my lap so the tapping of the keys doesn’t disturb my husband, and I’ll write until I fall asleep. Or I’ll wake up in the morning and spend a few minutes typing on a story. I also transcribe conversations that my husband and the kids have in the car, which I keep as part of my journal.

This “writing in the dark” thing has saved my word count on my stories. I have all these novels I need to write, so this additional work at night has been a life-saver.

Oh yeah, you should be a touch typist to do the typing in the dark thing. Occasionally I check the screen to make sure I didn’t accidentally turn it off while I was typing. (That has happened, too.) I tend to type super-fast in the dark and I just rush through mistakes I make when I’m trying to type very quietly.

I can write on this little guy anyplace — at the doctor’s office, sitting in the car, on the kitchen counter, sitting in the armchair in the dark, sitting outside while watching the chickens.

It has a tiny screen, which you’d think would make it difficult to write — but actually, the exact opposite is true. Not being able to edit your work on the Alphasmart is very liberating, because it’s only you … and the words. That’s it. When I’m working on the laptop, I often get wrapped up in nitpicking my text to death instead of actually writing. On the Alphasmart it’s just me rolling out a lot of crazy typing. I type fast, spilling words all over the page. When I’m writing in the dark, sometimes I start speeding along pretty quickly. But that’s how I work, and I don’t mind the cleanup.

Now, hipsters are selling internet-free keyboards that cost five hundred dollars that do exactly what the Alphasmart Neo does. Do you know how much this little device on my lap cost me? Twenty-four bucks, and that includes shipping and handling. And I just stick this puppy in my bag when I’m going someplace. If my kid is bored I hand it off to him – he is seven – and let him play with the keyboard for a while. It’s made for kids like him, so no worries, he can’t break it. If I had a $500 keyboard I wouldn’t let it leave the house, people!

One warning. This thing is no good with water. I’ve read reports of other people being able to use their keyboards after drying them out from a spill, but I had one keyboard killed from a glass of orange juice and a second one killed when I was trying to write in the bathroom while my son was splashing in the bath. Two machines over two years, which cost $48 overall. Now I’m super careful with them around water.

This machine has been such a gem. It’s cheap as hell but infinitely useful. Oh, and the CPU on this thing is a chip from Dragonball Z. If that isn’t cool I don’t know what is.

I’ve been typing long enough. It’s got to be five a.m. by now. Good night! I’m going back to bed!