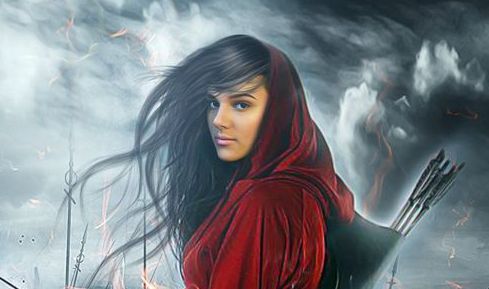 This excerpt is from the second chapter of Assassin’s Blade. Fia, an enterprising young dragonrider in medieval Italy, is being forced into an arranged marriage — except her dragon is going to be going to her husband’s family as dowry, and her future father in law is a real ass, threatening to whip her if she doesn’t fall into line.

Fia is not happy with this.

Her papa ran a hand over his hair. “If it’s that much trouble to you, then why not just give up this work? You certainly love to complain about something that’s so important to you.”

Fia cried, “Isn’t it enough to you that you’re taking my dragon and making me live with a man who wants to whip me daily?”

“He’s not whipping you daily!” Papa shouted. “He’s only threatening you.”

“Oh, well thank goodness it’s only a threat! I feel so much better now! What the hell is wrong with you?” Fia screamed.

She whirled to storm away –

—and found herself face-to-face with a person dressed all in grey, who wore a gray veil over their face so that only the eyes showed – hard blue eyes that glared at her.

Metal flashed in the man’s hand. A dagger!

Which he promptly jammed into Fia’s side.

“No!” She pulled back. She was wearing leather armor under her clothes, but the point of the dagger bruised her deeply.

Fia reached for her own dagger, but before she could grip it, something thudded against the back of the head so hard that her teeth clacked.

A moment later, she found herself lying stunned on the ground, a strange, rattled cry coming out of her mouth. And Ryelleth was standing over her with a gigantic roar, wings out, teeth showing, defending Fia.

A short distance away, men in grey robes swirled around her papa where he lay unmoving on the ground.

“Babbi!” Fia, her head whirling from being struck, struggled to get up. Ryelleth swiftly brought her nose under Fia and helped her to her feet – an old war dragon move, Fia realized gratefully, one that helped a fallen rider stand up. The leather armor she wore helped protect her from the heat of her dragon’s touch.

One of the men in grey jammed a cloth into her struggling papa’s mouth.…

“No!” Fia half-screamed, too bruised to draw breath….

… and two men grabbed him under the arms and dragged him away.

Fia unsheathed her sword and stumbled after them across the landing, her dragon keeping pace at her side like a gigantic hound.

An assailant blindsided her. She turned barely in time to block his attack with her sword, but her arm was weak from the earlier dagger attack.

Ryelleth struck at the man, swift as a snake, her huge teeth clashing a hair’s breadth from his face. The assailant sprang away from Fia with a shriek and raced screaming toward the men who were dragging her daddy away.

“Hold, Ry! No fire! They have my father!” Fia grabbed the straps and hauled herself up on Ryelleth’s back. “Give chase!”

Ryelleth hadn’t yet unfolded her wings, and so she went galumphing into the thick fog in pursuit of the men. Fia, who was now bouncing around in the saddle, frantically strapped herself in, shouting, “Fly, sweetie!” Dragons were great in the air, but on land they ran like little fat dogs.

Out came her wings, and Ryelleth sprang into the air, her mouth open like a dog ready to play. Fia grabbed her bow off her back and quickly nocked an arrow on the string, waiting for the fog to reveal her target ….

The fog opened to reveal, directly ahead, a small green dragon waiting with open jaws. A green racer, and the kidnappers were dragging her daddy onto its back.

Fia knew nearly all of the local ferry dragons by sight, as well as many of the dragons in the city’s army and the Pope’s army. This green racer dragon was not one she’d ever seen before.

She shot three arrows at the dragon’s face, but it only shut its mailed eyes and closed its nostrils the way lizards do, and the arrows glanced off its armor.

One of the men in grey commanded, “Fire, now!”

The green racer jerked forward to blast fire directly at Ryelleth and Fia.

Ryelleth roared and reared up, taking the brunt of the flames against her chest – a war dragon maneuver done to protect their riders. Fia made herself as small as possible on Ryelleth’s back as blistering heat and deathly flames broke against Ry’s body as a wave breaks across the rocks.

She held her breath to keep her lungs from being scorched by fire. But the flames went on and on until every part of her screamed with pain from the fire and the super-heated air.

With a surge of power, Ryelleth winged up into the air, out of the flames, rising higher and higher.

Now cool air surrounded Fia. She wheezed in air, immediately choking – but her goatskin gloves were burning. Shit. She smacked them out on the sides of her asbestos dress, wincing in pain. She’d been burned but there was no time to look at the damage.

“I told you to spend a few coins on asbestos gloves,” she muttered to herself, seizing the forward strap. Her hands were shaking, but she leaned against Ryelleth’s neck, as her dragon was still rising. “Pursue,” she called, voice quavering, sliding her hand forward across Ry’s neck toward the green racer, a directional signal.

Ryelleth pitched herself directly at the green racer, which was rising swiftly out of the fogbank. But, to Fia’s astonishment, part of the fogbank rose into the air with the escaping dragon, partly shielding it from view.

“No fog does that on its own,” Fia muttered. Clearly some evil magic was at work.

As the green racer rose, Fia could glimpse two people on its back through the fog. One was the dragonrider. The second man was her father, wearing his red robes of state.

“Daddy!” Fia shouted, though the deep bruise in her side hurt at her cry. “Ry, follow them! Don’t let them get away!”

Ryelleth growled with determination and blazed after them in pursuit.

Assassin’s Blade will be out on May 7th. Stay tuned for more!