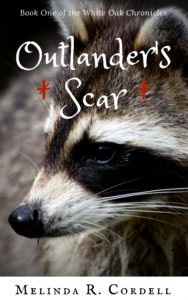 Finally the first raccoon book is out! I shouldn’t call it the raccoon book in public, I suppose, but shoot, I’ve been calling that since forever, and old habits die hard.

Anyway, I just published this one on Saturday, after all these years — I wrote the first draft on the way to Starksville, Mississippi, on my last day of sixth grade and the beginning of summer vacation. Of course this draft is a lot different than that one.

At any rate, I’m selling this book for 99 cents right now. I’ll raise the price up to $3.49 later. Whoa guys, that’s a lot of money! Well anyway, grab this puppy. I’ll have the next part of the trilogy coming out here in a month or two — Wandering Stars is pretty much ready to go, though it still has a few issues I need to work on before I’m sending it out live.

Acorn fights like the ancient warriors – as a yearling, he doesn’t have the weight to throw around – and loves the stories of the warriors, the Qelvska, who began the line of chieftains that now rule the raccoon tribes everywhere. Power and strength are Acorn’s goals – but then Catface, the leader of the outlanders, attacks him and gave him the outlander’s bite, the mark given to raccoons cast out of their tribes. Though Acorn did no wrong, his tribe shuns him. When another raccoon steals the chieftainship and exiles Acorn, he lashes back by stealing away the sister of death, which Catface was calling forth. War brews between outlanders and tribal raccoons, and Acorn knows that the only ones that suffer will be the innocents.