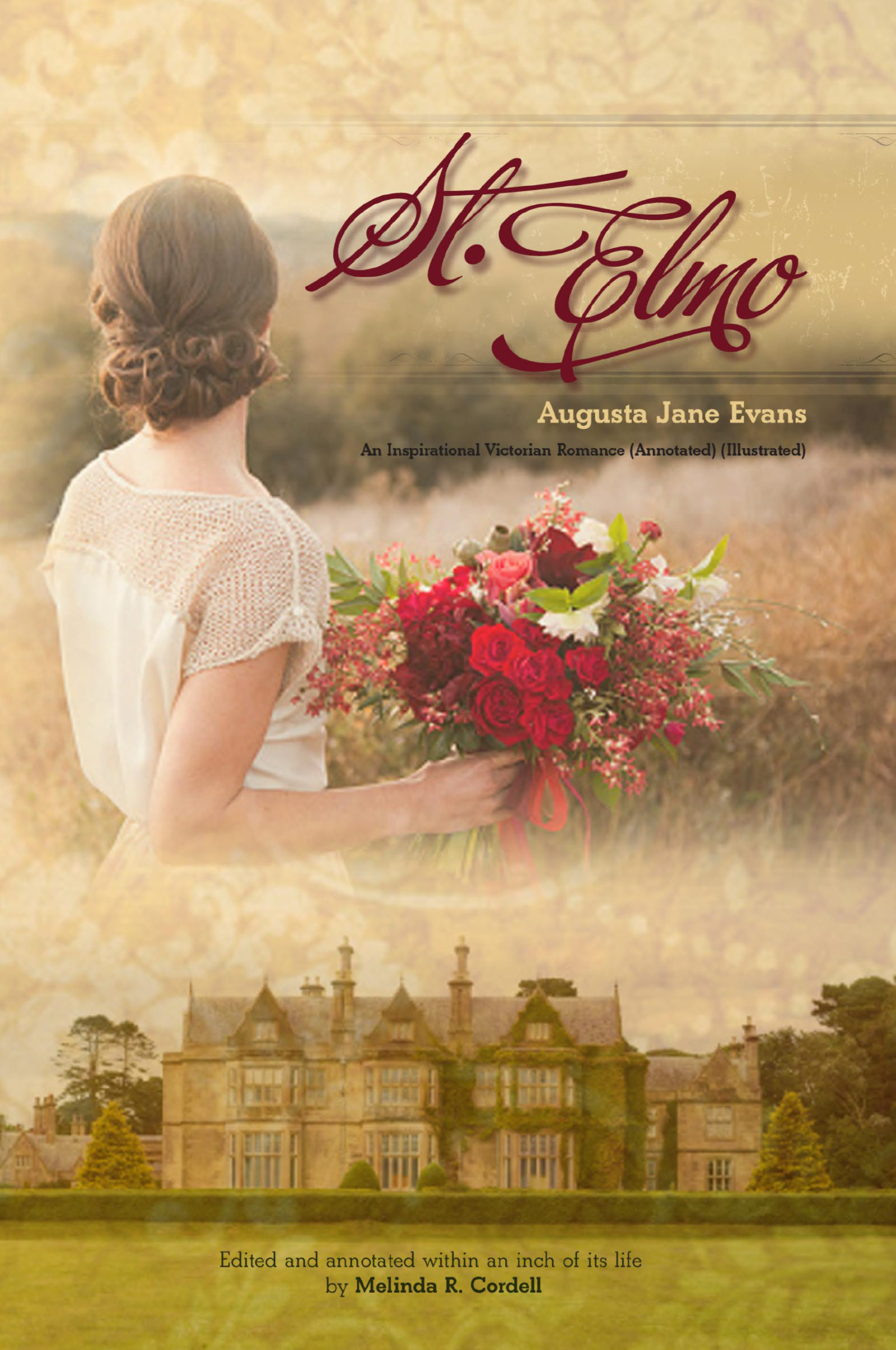 So here’s an excerpt from the old book I recently edited. It’s from 1866, so the language will be a little more elevated than what you see these days, but that smooths out after you read a bit. Edna, an orphan, has been taken in by a wealthy widow, Mrs. Murray, after she was badly injured in a train wreck, and now she’s living here. Edna is 15 years old and Mrs. Murray is giving her the education that she’s been longing for, and Edna is blissfully surrounded by books. But St. Elmo Murray, her son who is the master of the estate, takes a very dim view of this pious interloper. Their first meeting went very badly, and Edna shrinks from any contact with him.

Impressed by Hagar’s vehement adjuration to keep out of Mr. Murray’s path, Edna avoided those portions of the house that he preferred to inhabit. Thus, although they continued to meet at meals, no words passed between them after that brief salutation on the morning of presentation. Often, Edna was painfully conscious that his searching eyes scrutinized her; but though the blood mounted instantly to her cheeks at such times, she never looked up – dreading St. Elmo’s gaze as she would that of a basilisk.

One sultry afternoon Edna went into the park and threw herself down on the long grass under a clump of cedars, near which the deer and bison were quietly browsing, while the large white merino sheep huddled in the shade and blinked at the sun. Opening a pictorial history of England that she had selected from the library, Edna spread it on the grass, and leaning her face in her palms, rested her elbows on the ground, and began to read. Now and then she paused as she turned a leaf, looking around at the beautiful animals.

Gradually the languor of the atmosphere stole into her busy brain. As the sun crept down the sky, her eyelids sunk with it. Very soon she was fast asleep, with her head on the book and her cheeks flushed almost to a vermilion hue.

From that brief summer dream she was aroused by some sudden noise. Starting up, she saw the sheep bounding far away, while a large, gaunt, wolfish dog snuffed at her hands and face.

Once before, Edna had seen this dog chained near the stables, and Hagar told her he was “very dangerous,” and was never loosed except at night. The expression of his fierce, red eyes as he stood over her made her freeze, her heart pounding.

At that instant Mr. Murray’s voice thundered, “Keep still! Don’t move, or you will be torn to pieces!” Then followed some rapid interjections and vehement words in the same unintelligible dialect which had so puzzled her once before, when her grandfather could not control the horse he was attempting to shoe.

The dog was sullen and unmanageable, keeping his black muzzle close to her face. Edna grew pale with terror as she realized that his shaggy breast and snarling jaws were dripping with blood.

Leaping from his horse, Mr. Murray strode up. With a quick movement he seized the heavy brass collar of the savage creature, hurled him back on his haunches, and held him thus, giving vent the while to a volley of oaths.

Pointing to a large, half-decayed elm branch lying at a little distance, he tightened his grasp on the collar and said to the trembling girl, “Bring me that stick, yonder.”

Edna complied. There ensued a scene of cursing, thrashing, and howling that absolutely sickened her. The dog writhed, leaped, whined, and snarled; but the iron hold was not relaxed, and the face of the master rivaled in rage that of the brute, which seemed as ferocious as the hounds of Gian Maria Visconti, fed with human flesh.

Distressed by the severity of the punishment, and without pausing to reflect, Edna cried, “Oh, please don’t whip him anymore! It is cruel to beat him so!”

Probably he did not hear her, and the blows fell thicker than before. She drew near, and, as the merciless arm was raised to strike, she seized it with both hands, and swung on with her whole weight, repeating her words.

If one of his meek sheep had sprung at his throat to throttle him, Mr. Murray would not have been more astounded. He shook her off, flung her from him, but she carried the stick in her grasp.

“Damn you! How dare you interfere! What is it to you if I cut his throat, which I mean to do!”

Edna got to her feet, still holding the branch. “That will be cruel and sinful, for he does not know it is wrong; and besides, he did not bite me.” She spoke resolutely, and for the first time ventured to look straight into his flashing eyes.

“Did not bite you! Did not he worry down and mangle one of my finest Southdowns? It would serve you right for your impertinent meddling, if I let him tear you limb from limb!”

“He knows no better,” she answered, firmly.

“Oh, please, Mr. Murray! You have nearly put out one of his eyes already!”

He did not finish the threat, but held out his hand with a peremptory gesture.

Edna gave one swift glance around. There were no other branches within reach, and the dog’s face was swelling and bleeding from its bruises. Bending the stick across her knee, she snapped it into three pieces, which she threw as far as her strength would permit.

There was a brief pause, broken only by the piteous howling of the suffering creature. As she began to realize what she had done, Edna’s face reddened, and she put her hands over her eyes to shut out the vision of the enraged man, who was dumb with indignant astonishment.

Presently a sneering laugh caused her to look through her fingers. Ali, the dog, now released, lay fawning and whining at his master’s feet.

“Aha! The way of all natures, human as well as brute. Pamper them, they turn under your caressing hand and bite you; but bruise and trample them, and instantly they are on their knees licking the feet that kicked them. Begone, you bloodthirsty devil! I’ll settle the account at the kennel. Buffon is a fool, and Pennant was right after all. The blood of the jackal pricks up your ears.”

He spurned the crouching dog. As it slunk away in the direction of the house, Edna found herself alone, face to face with Mr. Murray, and she wished that the earth would open and swallow her.

Mr. Murray came close to her, held her hands down with one of his, and placing the other under her chin, forced her to look at him. “How dare you defy me?”

“I did not defy you, sir, but I could not help you to do what was wrong and cruel,” she said, her voice shaking.

“I am the judge of my actions. I neither ask your help nor permit your interference with what does not concern you.”

“God is the judge of mine, sir. If I had obeyed you, I should have been guilty of all you wished to do with that stick. I don’t want to interfere, sir. I try to keep out of your way, and I am very sorry I happened to come here this evening. I did not dream of meeting you; I thought you had gone to town.”

He read all her aversion in her eyes, which strove to avoid his. Smiling grimly, he continued, “You evidently think that I am the very devil himself, walking the earth like a roaring lion. Mind your own affairs hereafter, and when I give you a positive order, obey it, for I am master here, and my word is law. Meddling or disobedience I neither tolerate nor forgive. Do you understand me?”

“That means that you will not obey me unless you think proper?”

Edna was silent, and her eyes filled with tears.

“I have nothing to say that you would like to hear.”

“You would have a right to think me impertinent if I said any more.”

“No, I swear I will not devour you, say what you may.”

She shook her head, and the motion brought two tears down on her cheeks.

“Oh, you are one of the stubborn sweet saints, whose lips even Torquemada’s red-hot steel fingers could not open. Child, do you hate or dread me most? Answer that question.”

He took his own handkerchief from his pocket and wiped away her tears.

He threw his head back and laughed heartily.

“Sorry for me! For me? The owner of as many thousands as there are hairs on your head! Keep your pity for your poverty-stricken vagrant self! Why the deuce are you sorry for me?”

She withdrew her hands, which he seemed to hold unconsciously, and answered, “Because, with all your money, you never will be happy.”

“And what the devil do I care for happiness? I am not such a fool as to expect it; and yet after all, ‘Out of the mouths of babes and sucklings.’ Pshaw! I am a fool nevertheless to waste words on you. Stop! What do you think of my park, and the animals? I notice you often come here.”

“The first time I saw it I thought of Noah and the ark, with two of every living thing; but an hour ago it seemed to me more like the garden of Eden, where the animals all lay down together in peace, before sin came into it.”

“And Ali and I entered, like Satan, and completed the vision? Thank you. Considering the fact that you are on my premises, and know something of my angelic, sanctified temper, I must say you indulge in bold flights of imagery.”

“You thought it nevertheless. Don’t be hypocritical! Is not that what you thought of?”

She made no reply. Anxious to end an interview painfully distressing to her, Edna stepped forward to pick up the history which lay on the grass.

“What book is that?”

She handed it to him, and the leaves happened to open at a picture representing the murder of Becket.

A scowl blackened Mr. Murray’s face, and he turned away, muttering, “Malice aforethought! Or the devil!”

At a little distance, leisurely cropping the long grass, stood his favorite horse, whose arched forehead and peculiar mouse-color proclaimed his unmistakable descent from the swift hordes that scour the Kirghiz steppes, and sanctioned the whim which induced his master to call him Tamerlane. As Mr. Murray approached his horse, Edna walked away toward the house, a chill creeping down her spine that he might gallop up and overtake her. But no sound of hoofs reached her ears. Looking back as she crossed the avenue and entered the flower-garden, horse and rider were standing where she left them. Edna wondered why Mr. Murray was so still, with one arm on the neck of his Tartar horse, and his own head bent down on his hand.

St. Elmo — annotated and fixed up for a new generation — is now available on Amazon.