When I was in college, I hit a rough patch and had to drop out. I was working two part-time jobs while taking full-time classes, paying for rent, food, and college (I had no financial aid), while living on ramen and hot dogs. (Fun fact: Due to my poverty diet, the iron levels in my blood were so low that I was not allowed to give blood.) Also, I kept wanting to change majors – I wanted to be an English major, but I kept being told that I needed to get a major that I could earn money in. “You can’t make a living out of writing books.” So I came back home and started living in my old hometown of Nodaway, and I got a job at a garden center.

I had a great boss and co-workers at the garden center. We worked with the annuals, perennials, and herbs. We would sing while grooming the plants (when I say “grooming the plants,” I mean picking the dead leaves and old flowers off the plants – we weren’t brushing the plants’ hair or anything). We had a lot of good stuff to talk about, and we helped customers find what they wanted, and when they had gardening questions and we didn’t know the answers, we’d do everything we could to find the answer. It was a great deal.

The nice thing about working at a garden center is that you get a lot of free plants. Every day you’d work through the flats and pots, and if you saw any plants that were dying or droopy or looked bad, you’d take them out. Some of them just needed a little tender loving care, so those would go to the “plant hospital,” as we called it, where they would get a little attention and to perk up. Some of these would recover enough to go back on the tables, but some just sat there looking mopey, so we got to take these home.

I had a bit of a garden where I lived, but now I had a lot of garden. I wasn’t very interested in annuals, because they were there for a season and that was it for them. But I loved the perennials.

After all these years, I’m trying to put my finger on why they appealed so much to me. I think it was because everybody grew the same annuals over and over – marigolds, geraniums, petunias – but perennials weren’t as common. I always go for stuff that’s a little uncommon.

Another part of it was that some of these perennials could be true heirlooms in the garden, growing for years and years. I really wanted to grow a Gas Plant (Dictamnus albus) because they could stay alive for decades. Alas, the ones we had were just not in very good shape, and I didn’t have much luck getting them started in my garden.

At the time, too, I was a little tired of the sameness of all the annuals. Granted, I would change my mind later, when I was working as a city horticulturist, because annuals were such a help in coloring up my flower beds fast. But give me a break, I was in college, and at that time I was just a teeny bit pretentious. Okay, more than a teeny bit.

I also loved the variety of perennials. I had some 'Connecticut Blue' delphiniums that bloomed in the most gorgeous shades of blue I’d ever seen in a plant. I had a Japanese anemone that was a whirligig of white flowers until a bunch of blister beetles ate it up. The jerks. Sea thrift, with its little powderpuff flowers growing out of a tuft of grass; Nepeta, or catmint, with its purple flowers. My cat was nuts about catnip, but she had no interest whatsoever in catmint. I planted some dahlia tubers and got some fascinating, gigantic flowers. A perennial hibiscus startled me with magenta flowers as big as dinner plates. Grandma Mary wanted to know what these plants were! And she is wise in all things plant, so that’s saying something.

Now, bringing home a bunch of random plants from the nursery doesn’t exactly make for an orderly garden. But I didn’t care. I loved most the anticipation – of putting this sad, sickly little plant in the ground and giving it good soil and watering it regularly, and generally the plant would perk up and start growing, and the next year it would start flowering, and whoa! So that’s what the flowers look like in real life! And it all started with a sad-looking little droopy twig.

That’s one of the really cool things about perennials. They can fill a number of roles in the garden. You can get them in a variety of shapes, forms, and colors – whether they’re chunky or elegant, variegated or colorful leaves, sprawling stems or upright, billowing and carefree or architecturally perfect.

Perennials grow in all kinds of conditions, whether it’s shade, desert, heat, or cold, and build the background of beautiful borders. Perennials can provide four-season beauty, and they grow stronger by the season. Perennials promise all these things – and they deliver.

At the end of the spring season, when things were slowing down, I was hanging around the garden center one day with my boss and co-worker, just talking. I said, “You know what? I think I’m going to go back to school. And this time, I’m going to major in horticulture. You guys want to come with me?”

We ended up commuting to school together and took horticulture classes together, and I finally graduated four years later, or close enough. (I minored in writing, naturally.) So, again, perennials turned out to be very helpful. I did my senior thesis on English gardens and totally snowed my Senior Studies professor. He was an Ag man who didn’t know much about gardening, so I got an A.

Shortly thereafter, I got a job as city horticulturist. I had a million gardens to plant in the spring. I planted annuals everywhere, but boy, that repetitive motion really hurt my hands and wrists. I used a trowel. Then I tried using bulb planters, which were not effective in the clayey soils in city gardens. Finally I used a little child’s shovel to dig a series of holes, then dropped the annuals in and covered them up, in order to save my hands and wrists from all that digging. But this was a lot of labor in spring, and I was always so far behind on all the tasks that needed tending to.

So that fall, I bought a bunch of cheap perennials (everything goes on sale in the fall), wrote down the colors and blooming times for them so I could sort out what would look best where, and then I put them in various gardens to fill out the borders. A one-time planting saved a lot of time and trouble in the spring. Once the perennials filled out and started doing their thing, I didn’t have to plant so many annuals, which eased my workload. Now I could do all the other things that needed done, which I couldn’t do before because I had been planting annuals.

Oh, and I was a one-woman crew for the whole city. I was assigned inmate labor, but I couldn’t send them off by themselves to work on other gardens – too bad. Or I’d get somebody doing community service, which was more of a babysitting job – decidedly unhelpful! At least in the summer I had a very helpful seasonal worker, and how I wish I could have had her working with me in early spring and early fall. But you can’t have everything, I suppose.

I had perennials going in everywhere, even in the rose garden, for extra color and to give me an easier time in general. The nice thing was, in fall I could divide the perennials, then plant them out and have many more perennials. I could gather the seeds in October and November, when I was cleaning up the gardens, and plant them in the greenhouse to spread around the parks next spring. Your taxpayer dollars at work.

Anyway, this is why I am such a big fan of perennials. In recent years, roses have pretty much eclipsed perennials for me, These days, I’m starting to come back around to perennials again. They’re easy to take care of, they offer a multitude of forms and shapes and sizes and colors and blooming times, and once they’re in the ground, they’re pretty good about growing for a long time. They got me into my major in college (finally), they saved me a lot of time as a horticulturist, and they look good.

All in all, perennials are a very, very helpful kind of plant to have. 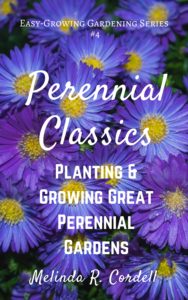