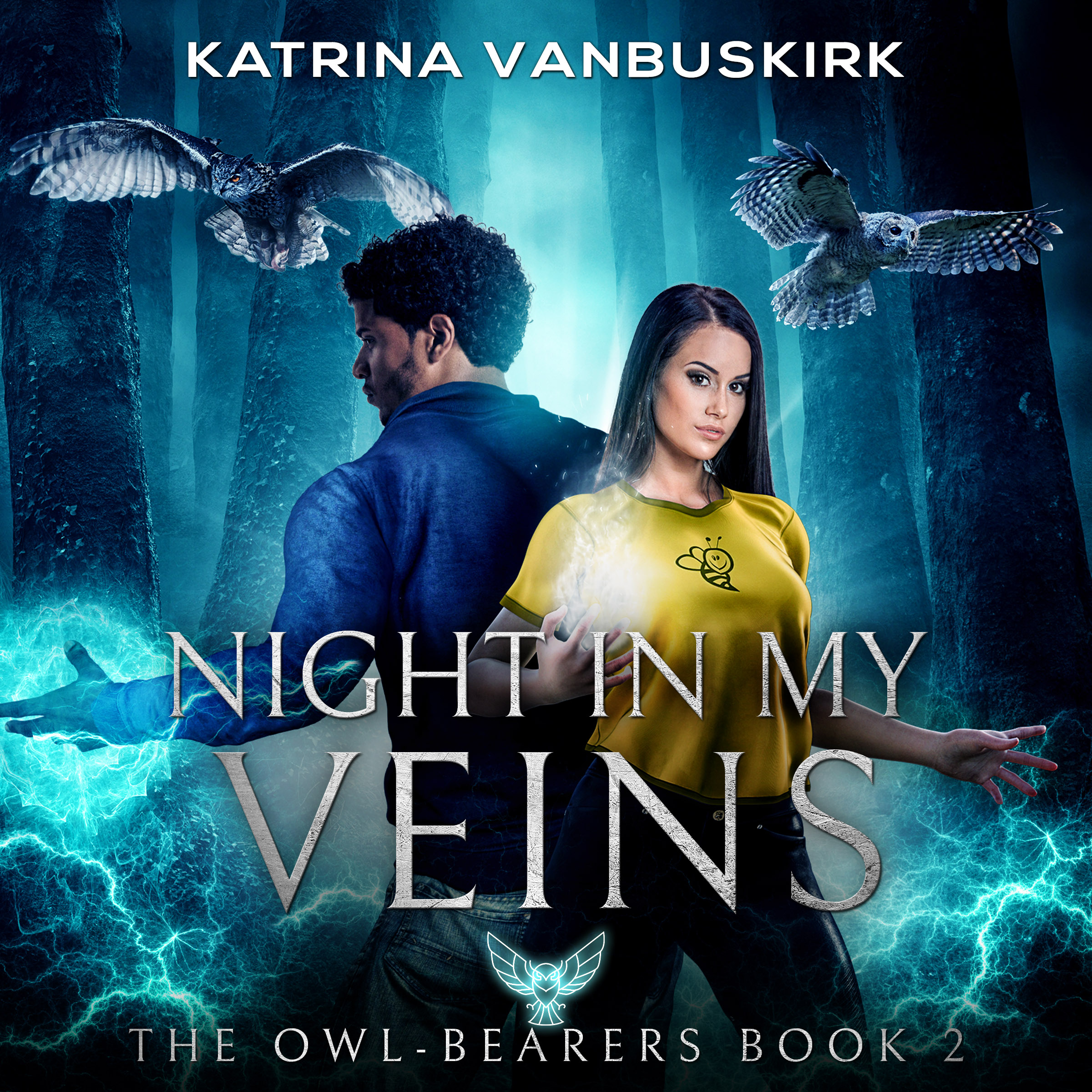 Here’s the first chapter of my upcoming book, NIGHT IN MY VEINS, which will go live on December 20. It’s the second book of the Owl-Bearer series, following IN THE MIDNIGHT HOUR.

(Don’t forget — I’m writing this under my pen name, Katrina VanBuskirk, because this book is for mature audiences — 18 and up only. If open-door sex scenes are not your cup of tea, you’d be better off sticking with the books under my real name, Melinda R. Cordell — all of my books are clean.)

Marcus fought to breathe as he gunned the Splinter RV out of Swissville, topping 80 mph on a two-lane blacktop highway. He felt as if the oxygen had been sucked out of the inside of the RV. Though he tried to suck in his breath, he could only get a small particle of air, not enough to inflate his lungs. He opened the windows and wind blasted in, but even though he put his face directly into the wind, gasping like a fish out of water, he still couldn’t breathe. I’m trying to drive, so stop it, he thought at whatever was cutting off his breath. Patches of blackness flashed before his eyes as he fought to stay conscious – not so much for himself, but for his friends in the back.

Sarae, who Remy had spelled into unconsciousness earlier, was lying on the fold-out bed in the back, choking, and each of her gasps went through him like a sword. Sarae’s owl, Zoe, croaked, “Drive faster get us out from under the cloud.” The owl’s voice was raspy, and she hacked.

He wasn’t sure how well he’d stay on the road while going 80 while he was half-unconscious, but getting away from whatever spell was doing this to them was his only hope.

Marcus fought against his starving lungs until he managed to suck in a small breath – enough to allow the highway to swing into place before his eyes, to his relief.

It’s working! He accelerated, and the miles blazed by.

And suddenly the pressure on his throat eased, and a breath rattled into his lungs, sweet relief. Sarae and her owl gasped in the back. They were going to be okay. Relief made his eyes suddenly tingle with tears, but he breathed deeply, calmed himself down, allowed his eyesight returned to normal. He slowed the RV down to a more reasonable speed, thankful that no law-enforcement officials had seen him breaking the speed limit.

“Is Sarae breathing?” Marcus asked over his shoulder, poised to pull the RV over at the first sign of trouble.

Marcus leaned back in his seat for a second, taking cleansing breaths, trying to relax his neck and shoulders to ease the pain in his head, almost a migrane.

So that’s where Remy is, Marcus thought. We left him behind, in that.

But Remy hadn’t given them any choice – he’d just cast a spell to put Sarae into a deep sleep, gave her to Marcus, and had demanded that Marcus get her out of town before the people who were after Remy found Sarae.

“They must not get their hands on her,” Remy said.

Remy’d had tears in his eyes as he’d told Marcus this. Marcus had known Remy most of his life, and had not seen him cry since the night he’d lost everything, so long ago.

But Sarae’s little screech owl, Zoe, was still furious. She flew to the passenger side seat and ruffled her feathers aggressively.

“Are you and Sarae all right?” Marcus asked.

The owl’s feathers settled slightly and the huge black pupils of her eyes went smaller as she relaxed slightly. “She’s doing fine now. Thanks.” The owl poofed up again. “No thanks to Remy. I will tear him up if I ever have to endure his presence again.”

The owl was still super-pissed that Remy had put Sarae into a deep sleep against her will. Marcus wasn’t so ready to condemn Remy for that – especially as upset as he’d been – but let it go. No good in talking about it while Zoe was mad. She was only a little screech owl, but she had fierce talons and a sharp beak that he was not going to cross.

He wanted to know what the hell was going on, though. Marcus had come to Missouri, of all places, with Remy. He was still was confused about why Remy suddenly left a thriving business in solving crimes in with the help of ghosts in L.A. to come to this god-forsaken place in the middle of nowhere.

Marcus was playing Bollywood music to keep himself alert at the wheel, but not too loud because Sarae was sleeping in the back. His knuckles ridged the steering wheel as he worried about Remy.

Marcus did not want to hear Remy’s reasons for having done this crazy thing. Remy had told Marcus to leave, to take Sarae with him, and not come back. Marcus had done it, though not willingly.

But Marcus had no intention of obeying Remy for very long. The dude was obviously out of his head. So Marcus would leave for a little while, give Remy time to calm down.

He and Sarae could spend the night in Kansas City. Tomorrow they could visit the Negro League Hall of Fame Museum and visit some nice shopping places. Make a day of it. Then Marcus could return to Swissville the day after that – during daylight, of course, in hopes that this would be a safer time against the dead and the monsters – and talk Remy down.

Because if there was anything that Marcus’s long friendship with Remy had taught him, it was that Remy was not good at being on his own for very long.

He was pretty bad at it, in fact.

Remy had a knack for forgetting – or ignoring – certain essential life skills. He often would forget to eat, or he’d run out of gas because he couldn’t be bothered to fill the tank. Or, as in the case with his most spectacular gaffe, he lit a match in a fireworks factory because he was too busy thinking about God knows what.

Marcus had just managed to grab Remy’s hand and haul his ass out of there before the whole place went up. “Please disperse! Nothing to see here! Please disperse!” Marcus yelled as Catherine wheels and rockets and starbursts exploded behind them.

In some ways, Remy was something of a special case. But Marcus was glad to be working with him. They’d been friends since forever. Remy loved puzzles, and he could spend hours lost in thought, piecing together clues, considering and discarding possibilities, until he’d arrive at an idea for a lead. And he was able to speak to ghosts with the help of his owl, Hinto, so he could ask the dead about what they saw at a crime scene, or could direct him to where the perpetrators were hiding. He’d been able to build a thriving business in solving crimes in LA with the help of the dead.

Marcus enjoyed the work he did with Remy, though he preferred to stay well away from the spirit world. He took care of billing, logistics, kept Remy’s schedule straight, kept Remy from wandering into traffic or taking off his pants in public when his mind was fully engaged. Remy paid Marcus well, because he didn’t care about the money. Marcus had been able to keep his parents from being swallowed up in debt after his dad had a hospital stay and surgeries. If it hadn’t been for Marcus’s work, the medical bills would have put his parents into bankruptcy. Remy had even been all like “Let me cover those bills for you,” and Marcus had to say, “No, it’s cool, I got this. Really, I have all this money I’m not using.”

Remy was really a good guy, and he adored Marcus’s parents, because they had helped raise him after Remy’s family had died in the fire.

In the back, on the foldout bed, Sarae’s owl sat brooding over Sarae. But Sarae was stirring, talking in her sleep.

“Is she waking up from whatever trance Remy had put her in?” Marcus asked the owl.

The owl grumbled. “She’s waking. But I do not want to hear the name of that man.”

Apparently the owl was still mad at Remy. What the hell did Remy do to Sarae? Marcus scanned the interstate in front of him. There were some restaurants and stores at the next exit about three miles off. He signaled and got into the right-hand lane.

Marcus, taking the exit, found himself in a sort of little strip mall hell along a road that led into more unpopulated area with trees and farmland beyond.

Another groan from Sarae in the back. Fortunately, the strip mall had a large parking lot next to it. He pulled into a spot near a Chinese restaurant and a thrift store and parked. It was about seven in the evening, but he was already exhausted despite having slept for part of the day – though, to be sure, he was probably not “fighting the undead” level of exhausted.

Marcus turned around in his seat, thinking. He was worried about Sarae, because Remy did like to lay around and play around. He probably didn’t bother to mention that to her. But now Remy seemed out of his head out of fear for her. Maybe he really does feel a connection with her, Marcus thought.

After having known Remy all these years, he wasn’t sure if this was a good thing or a bad thing.

Marcus sat down in his chair in the back, a very comfortable seat that looked out a side window, and opened his laptop, waiting for Sarae to wake up. Her owl opened one golden eye a slit at him, then closed it and pretended to sleep again.

He was still concerned about Sarae. In some ways, she seemed damaged, fragile; but in other ways, she was tough as nails. Coping mechanism, he thought, as he worked on some coding.

Marcus set his laptop to the side, speaking comforting words to her to soothe her. “Sarae, you’re here with me, Marcus. Wake up, Sarae.”

The owl began singing something, and he stopped talking to listen. It was a thin thread of music, half-whistled. Then its music broadened out into a warm trilling that rose and fell like a small bird high up in the air. What a gorgeous song. The owl’s music felt like a cup of coffee to his senses, waking him up inside.

As her owl sang, Sarae’s unseeing eyes focused on his. Then he saw him. She stopped her garbled talk, and her hands sank to her sides to the bedcovers. She looked at Marcus with some puzzlement, then at the fold-out bed she lay on. “What happened? What the hell is going on?” She looked wildly around the RV – and then her eyes darkened and she turned back to Marcus. “And where the hell is Remy?”

One-click here to preorder NIGHT IN MY VEINS — it goes live on December 20!