Here’s a crazy story. The Chieftain and Outlander’s Scar are kind of the same story, except there’s a world of difference between them. 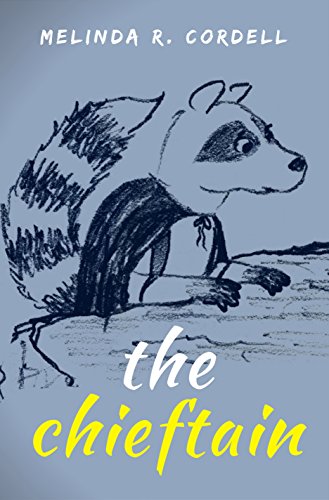 I worked on The Chieftain from 1993 until 1996. I sent the finished novel to publishers and got a bunch of rejections. I finally moved on to other projects – which included a trilogy of raccoon books, written with many of the same characters, but in a more realistic setting, where the raccoons didn’t wear clothes and did raccoonish things like eat fish and get into garbage and have music battles with a spirit-hound. Okay, the last is not something you generally see raccoons do, as far as I know.

Time went on, and I developed the other two books in the trilogy, and then I went back and rewrote the first one. Basically I wrote the thing backwards. And I sent that out to publishers, and got a couple hundred rejections on the whole lot. 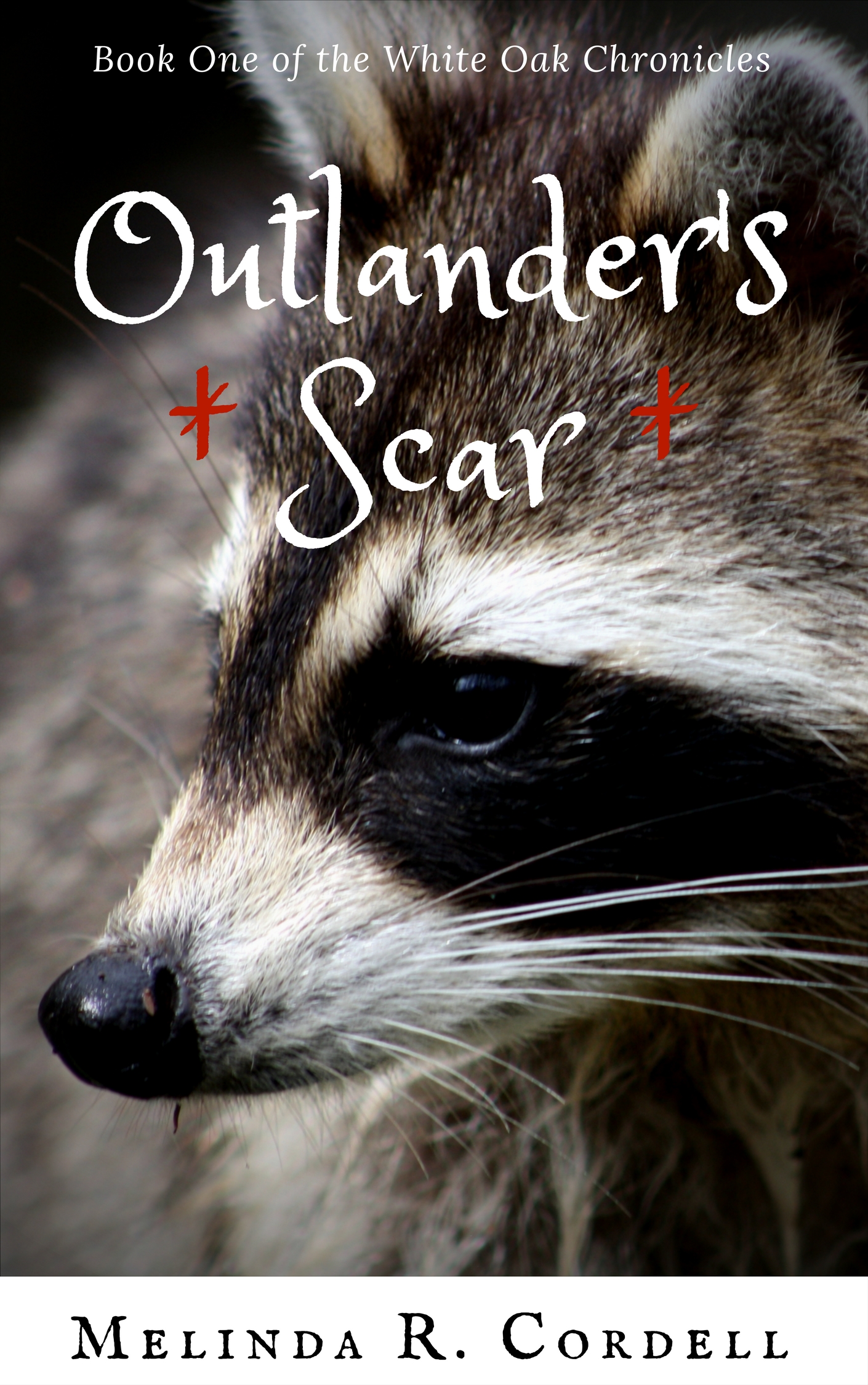 Outlander’s Scar is the very newest version of Acorn’s story. He’s the same, and we still see Paddy, Emily, Laurel, Shagbark, Rhubarb, and Sterling, only with new names  and a whole new set of battles, complications, friendships, and victories.

Here’s the beginning of The Chieftain:

Where It All Began

The full moon shone through the branches of the Great Oak when I finished my speech. I sighed, glad to be done, and the wind sighed back in the dying wine-red leaves. The raccoons who I would soon lead as chieftain made a light stir as they leaned over the whisper to their neighbors. One of the three councilmen sitting at the foot of the mossy hillock where I stood squinted up at me. “Thank you, Acorn. You may step down.”

When I did, Paddy, the newsmonger, hopped up in my place. “Good speech,” he whispered, flashing his grin. I sat next to Chieftain Shagbark, who nodded, and I gave both a nervous smile.

“Folk!” Paddy said in his carrying voice. “You may take a few moments to stretch before we hear the final speech for the chieftainship, which Shagbark will give in Acorn’s behalf.”

Shagbark, his grizzled salt-and-pepper fur glowing in the starlight that sifted through the forest canopy, leaned toward me. “Boy, you done well,” he rumbled.

My heart swelled. I had followed at Shagbark’s heels since I was a toddling cub, walking with him on rounds and learning the routines of the chieftain even before I’d know I was to be his successor. He seldom gave praise. I longed to hear him say how he thought highly of me, wanted him to say that he looked at me as his son, but I knew how unlikely that was.

“Thank you, sir,” I said, and he looked like he was going to say more – but a movement of black came out from behind the old chieftain, and the words died away in my throat.
Councilman Rhubarb had come over to us.

Shagbark, seeing him, clambered to his feet.

“Well met, councilman. Sorry I gotta speak against you.” Rhubarb was also running for the chieftainship, the only one running against me.

I got to my feet, glowering at Rhub. But Shagbark said, “I would like that very much. But go on ahead. I gotta talk to Acorn first.”

“Be quick.” Rhub inclined his head and went on to his tree.

I sat down with a thump, attracting Shagbark’s attention. “Boy. Boy? You sulking?”

I crossed my arms on my knees and stared down at them, pretending not to hear.

“You know how proud I am that you’re my student.”

Actual praise. I blushed a little under my fur. “Yeah. Thanks.”

Shagbark grumbled to himself and scratched his head. “For better or worse, you’ll be chieftain next, whatever Rhubarb thinks. You gotta act like a chieftain. You know that sometimes you gotta play politics. This is one of those times.”

I shrugged, wishing he’d notice my disappointment. He laid a paw on my head, then sighed. “Can’t let that mead go to waste. And by ‘go to waste’ I mean ‘let Rhub drink it.’ Hmph. We’ll talk after the speeches.” He squeezed my shoulder and sauntered off toward Rhub’s tree, cocking his head the way he did when he listened to his heart beating – he’d been having problems with it lately.

The cubs ran over to the woven-grass swing to climb aboard. Councilman Greypaw grabbed the swing and whirled them around as hard as she could until he fell down from dizziness. The cubs shrieked with delight. But I thought of Shagbark talking to Rhub as if they were old friends – okay, maybe they had been in the past – and my guts churned. This was my night. That old dog had no right to interfere – which was probably why he’d asked Shagbark to come with him. Another dig at me.
##

And here’s the beginning of Outlander’s Scar:

Acorn had faced the hounds, and he had spoken with the immortal goddess of death. But neither of them had sought to destroy both his body and his soul. This fallen being taking shape before him wanted just that.
From a gap in the air, tears of fire fell to earth, illuminating the blackness of the night forest. The eyes of the raccoons, Acorn’s tribe, glowed green in the fire’s sickly light. The Lady of the Spirit lay stunned on the ground behind Acorn, her legs slowly drawing close to her body. Acorn stepped in front of her to shield her – a feeble defense against this danger that legend had spoken of. He, Acorn, the chieftain of the tribe, faced the fell goddess alone. He was beyond fear. He was so afraid that he was certain he would die of it.
Something white pushed from behind the fiery gap in the air. A white muzzle and head pushed through. Shoulders strained behind the gap, then slipped through. A white beast fell to the ground.
The fire vanished. The beast shook itself out, a white raccoon with long hair, and fire blazed across the snow bank of its fur, a brilliant yellow-gold like the sheen of a holy sun. In its iron-black eyes was the power kindled when two thunderstorms merged. Before that majesty and power Acorn stood, his heart pounding. This is how it ends, he thought. This is where my life is going to end.
With an unutterable grace, the fell goddess turned its head to investigate one side of its body, then the other. “No, this will never do,” it said in a melodic feminine voice. It hunched over. Black washed through the white like color through a metamorphosing butterfly, one, two, three, four pulses. Its muzzle stretched, shifted, eyes going wide with pain. The rest of its body pulsed like a butterfly as it pumped blood from its body to its wings. Darkness rushed over its fur. The creature stayed hunched as its legs lengthened; it arched its back and choked as the change passed over it, as it shifted into its new form. For a moment the being collapsed, gathering strength. Then it rose. Instead of gold on white, a sickly red washed across the black of its fur like sheen on stone. And it had taken on the form of a gigantic black hound.
It opened its eyes directly on Acorn. White eyes, with not even the print of an iris on them.
“You alone block me from my desire,” the spirit-hound whispered in a voice like the grit of stone.
At her words, the stars all went out. The silver light of the moon vanished from the sky. All was dark, except for the ugly sheen of fire on her fur.
Acorn had indeed come to stop this being where it stood, returned against all laws of exile. He was here to protect his tribe as he had been charged. But he had failed. Nothing could stop this hound. Acorn’s voice was dry with horror, and words would not come to him.
If I must die, he thought, then I will die as a warrior.
Acorn sang, with all his force, his death song. Yet even as he sang, his words becoming more thrilling, making his heart strong, his song was like that of a lone cricket’s as the first snow, flake by flake, smothers it in the grass. He sang on.
I think it’s safe to say that if you liked The Chieftain, then you’ll also enjoy Outlander’s Scar, as well as the other two books in the trilogy – Wandering Stars and Silverlady Descends (which will be out in a month or two).