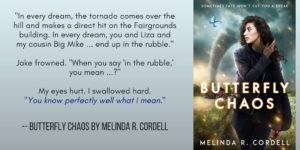 In Butterfly Chaos and my other novel, What You Can’t Take Back, I have some big tornadoes tearing through my hometown in northwest Missouri. I used to be super-scared of tornadoes and thunderstorms, but now I love them.

The kicker is, I’ve never seen a tornado. I’d sure like to — but only if I can get the hell out of the way if the storm starts tracking toward me!

I was actually outside in a tornado during church camp. Me and a couple of friends were sitting next to the campfire making hamburger patties when it started to rain. “Eee! Eee!” we said, still trying to make hamburger patties in the rain, because we were such troupers.

Then huge hailstones came tearing down through the trees. Oh, they hit so hard! But imagine being conked with golf-ball sized chunks of ice that have fallen from about two miles up in the air — it really hurts! One kid actually got a slight concussion from them, we found out later. We were huddled against the trees, trying to not be hit with hailstones, when one of the counselors came roaring up in his Toyota pickup with a camper shell. “Yay!” we cried.

He yelled, “Get in here! There’s a tornado!”

Talk about a motivational speech. I pretty much flung myself into the back of that pickup without touching the ground. All the rest of the kids jumped in, and Don drove like a speed fiend through the woods back to the main buildings, and we all piled in.

Once there, we found out that one of my friends got struck by lightning. She’d been sitting by the heater in the storage room, the interior room where everybody had huddled for shelter, but she was all right. It was a hell of a time. We ended up having our campout in the main building instead, roasting marshmallows over candles. Fine with me.

In my part of the state, we actually don’t get a lot of tornadoes. Grandma Mary saw a little rope tornado pass over while she was out in the strawberry patch — there was an E0 tornado that passed by Nodaway in the early 1960s so I think that might have been the one she saw. It didn’t touch down.

We have had big tornadoes to the north, where it’s not as hilly. Grandpa Eldon (my husband’s grandpa, same diff) said that he was trying to make it out to the storm cellar when a tornado picked him up off the ground and carried him in the air a little way, and once he managed to get into the storm cellar, Grandma Jean cussed him out. He also told about the time when he was a boy in Wyoming, and a tornado came up on him and his dad when they were plowing. He said they turned the heads of their draft horses so they couldn’t see the oncoming storm — they had blinders on — and he and Grandpa Ray took shelter behind the horses because there was nowhere else to go. 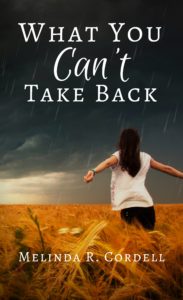 We did have one tornado pass thorough the area when I was a kid, which I think I mention briefly in both Butterfly Chaos and in What You Can’t Take Back. I was in fifth grade at the time — I think it was in 1983. There was a huge thunderstorm outside, so loud that we were all getting scared. Then Mr. Weston came to our door and told everybody to get into the hall because there was a tornado warning.

We were all scared now. Nobody spoke as we hurried into the hall and crouched against the wall, our hands laced over the backs of our necks. The storm was really raging outside, with big thunder that shook the school, and the teachers standing and looking around, talking in whispers now and then, and I really thought we were going to die.

Then one kid said, “My butt itches.”

And we all busted out laughing. It was just the right thing at the right time. The storm died down, and we were okay.

Humor, when you put it in just the right spot, really does make everything right.

I heard that the tornado actually did touch down briefly in Savannah, about six miles away, and spun a truck around in front of the Dairy Queen, but nobody was seriously hurt, and thank goodness. 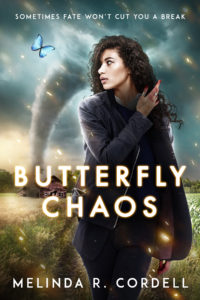