I’m keeping pretty well ahead of the game for Nanowrimo (National Novel Writing Month, which happens every year in November — authors all over the world aim to write 50,000 words between November 1 and November 30). I’m averaging over 2,000 words a day, which is kind of an amazing thing in itself. Over the last four years, I haven’t done anything like that — I’d struggled to meet my 1,667 daily word count, but, like I said, I’d really lost faith in myself during that time. It’s amazing what finding a receptive audience does to boost your faith in yourself. It’s magical.

Here’s a couple of pages from my current story about Gabe, who’s a junior in high school, tall guy, likes reading and wants to be a mechanic working on jet engines in the Air Force. And suddenly, one morning, he wakes up as a horse. Then other kids his age around the area start changing into animals. Gabe and his grandpa have been bringing other kids — changelings — to his farm to give them a place to live.

Here’s a little sample of what I wrote.

So the changelings are starting to come over to Grandpa’s house. They’re kids whose parents aren’t helping them. They’ve been cut off, no place to live, no shelter, because they’re animals.
“I’ve been living outside for the last week,” said the groundhog. “I dug a nice hole in the ground. But I’ve been beside myself the whole time.”
“My parents keep throwing rocks at me,” said a fox.
“Dad can go feck himself,” said a bobcat.
So Grandpa and I brought them to his place, to live in or near the barn. The groundhog dug a hole, the fox made a den under the barn, and the bobcat lived up in the loft. The groundhog’s name was Jeff.
“We’re bros, man,” he told me while scrounging through the straw on the floor for bits of grain. I was cool with that.

We got another report of a missing teen south of town, a changeling who was replaced by a rabbit. Grandpa and I went out there after Grandpa asked the parents if we could come over. “I’m not acting in any official capacity, but this has happened to my family and I want to see if I can talk to you and help.” They weren’t really wild about it but said okay. So over we trotted, Grandpa on my back. I really liked carrying him around on my back. It was doing him a lot of good. He seemed to be getting healthier, and there was a spring in his step. He really did love riding horses, and he’d told me many times about how he loved to be a team with his horse, when he had an especially good one. I was glad that I could make that happen for the old man
When Grandpa knocked, the mom came to the door and talked through the screen.
“I’m sorry we asked you to come. You need to go away. Donella isn’t here. She’s been kidnapped by somebody who thought it was funny to play an awful prank.”
Grandpa looked at me, then back at the lady. “Was there an animal in ….”
“No! There wasn’t! My girl never would have turned to a changeling! She’s not like that.”
“Not like what?”
The woman glared at Grandpa for a long moment. I was shocked at the look on her face – as if he’d killed her daughter. Jesus.
She hissed, in a voice that scalded, “My. Daughter. Is not. A slut.”
And then she slammed the door.
Grandpa kind of stood there for a long minute, hat in hand. Then he turned and took a shaky breath.
“Honey,” he said. “Now what the hell was that about?”
“IDK,” I tapped, just as confused as he was.
All the same, apparently this lady was denying that her kid was a changeling. So I started looking around as Grandpa climbed up into the saddle on my back.
I called, “Hey, Donella! Donella? It’s me, Gabe. Do you need a place to stay? Until your folks, um … “
Nobody replied.
“Come on, honey,” Grandpa said. “Giddyup.”
We started walking away. I called, “Donella?”
A door flew open behind us. “Shut your damn horse up!” It slammed.
Grandpa straightened in the saddle – I felt him do this – and we rode away.
“Donella,” I whickered. “We can come back for you. Just in case.”
It wasn’t until we got into town that I thought of something. “Grandpa,” I clicked.
“What, honey?”
“I think I know why Donella’s mom said those things.”
I told him something I heard on the radio in the barn. Grandpa had the radio on a community radio station that had independent news that was verified. On some days with weird weather, though, other stations from other places would step on it with their religious stations. The people on those stations would talk about stuff that made my tail curl, about how the end of days was coming, and how women should never work outside the home, how hypnosis was just people playing with your mind, and how stuff like black holes and dinosaurs were just made-up science.
But one day they were talking about how changelings – kids like me – were abominations and sinners. “Do you know why they’re animals?” the preacher said. “Because they gave in to their animal urges. Though they were just kids, they were having sex at a young age when they shouldn’t have been. These kids chose to bring this punishment on themselves through their lewd actions.”
I was tempted to kick the radio. That sicko.
But now I told Grandpa what that guy had said.
“Jesus Christ,” Grandpa said. And we walked on for a while.
“Do you think?” Grandpa started to say, but then didn’t say anything for a long while. We just didn’t say anything for a long time.
“That preacher is full of shit,” I clicked.
He patted my neck ahead of the saddle. “I know,” he said.
That was our first idea of trouble. 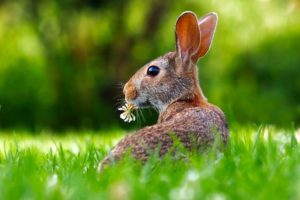